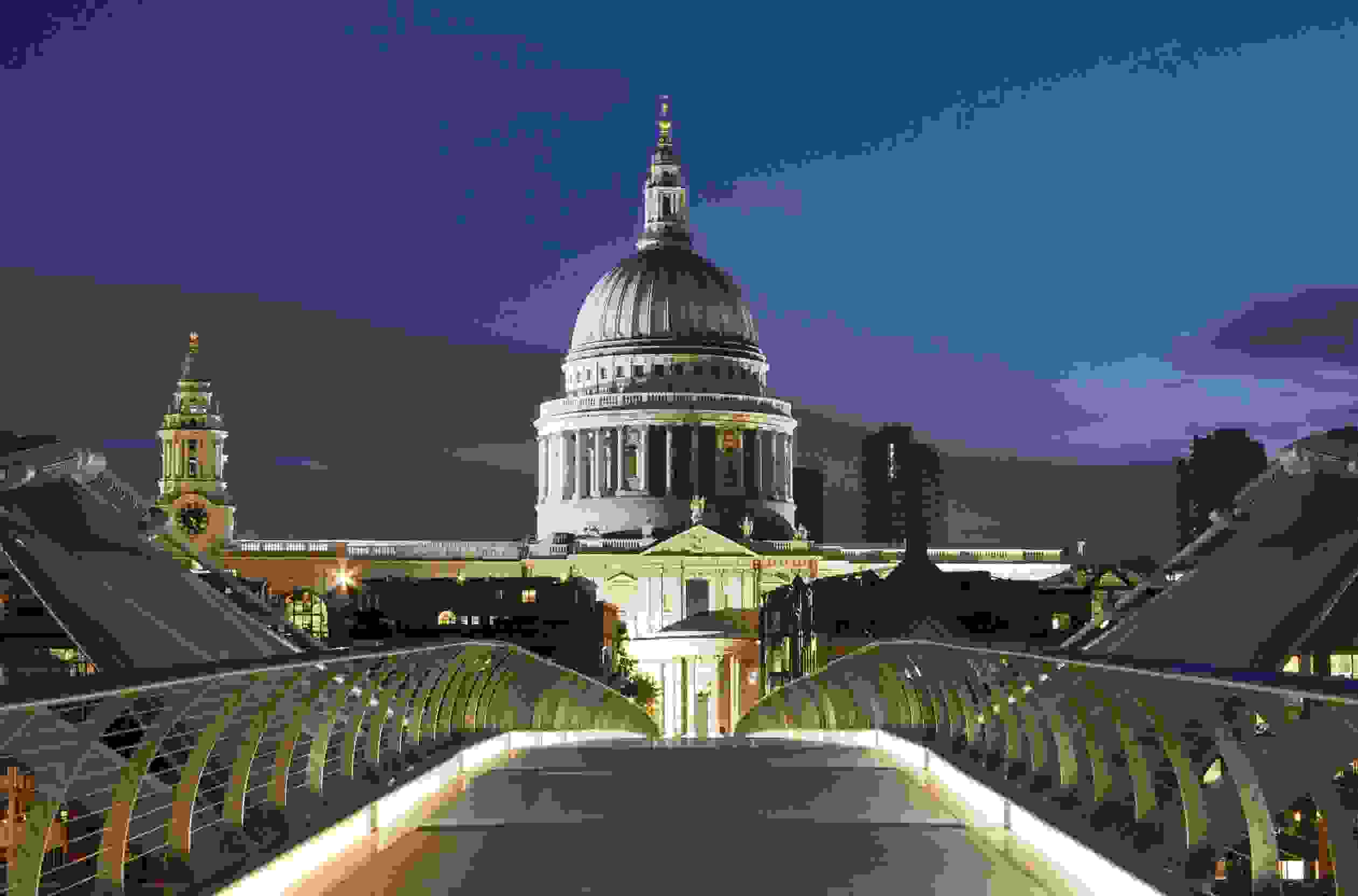 See Past The Landmarks

“When a man is tired of London, he is tired of life… for there is in London all that Life can afford “ Dr Samuel Johnson, 1777

One of the most cosmopolitan cities in the world, London covers over 600 square miles and is home to more than 8 million people. It can boast a diverse creative history to modern day art, literature and performance. Equally it is a centre of business and finance and has helped shape the world as we know it.
London has inspired figures such as Karl Marx, Charles Dickens, Jimi Hendrix, Handel, Gandhi, Claude Monet and Oscar Wilde, to name but a few.
A city that has continually re-invented itself, from Roman times, the Great Fire, re-building after the World War II to the city you see today.

Here are a few highlights…

Enjoy the view from the top of St Pauls Cathedral.
Designed by one of London’s most influential architects, Sir Christopher Wren’s masterpiece was built after the Great Fire and has many secrets waiting to be discovered.

Explore Kew Gardens.
Exotic plants from around world, the botanical gardens has one of the most important Victorian Green Houses in existence. Walk in the tree tops and enjoy the tropical palms from above, or see the marine display with live fish.

A Tour of Fullers Brewery.
The last remaining large working brewery in London, the site at Chiswick has been brewing beer for over three centuries. Sample a few of the beers after you have been taken round and enlightened on the brewing process. 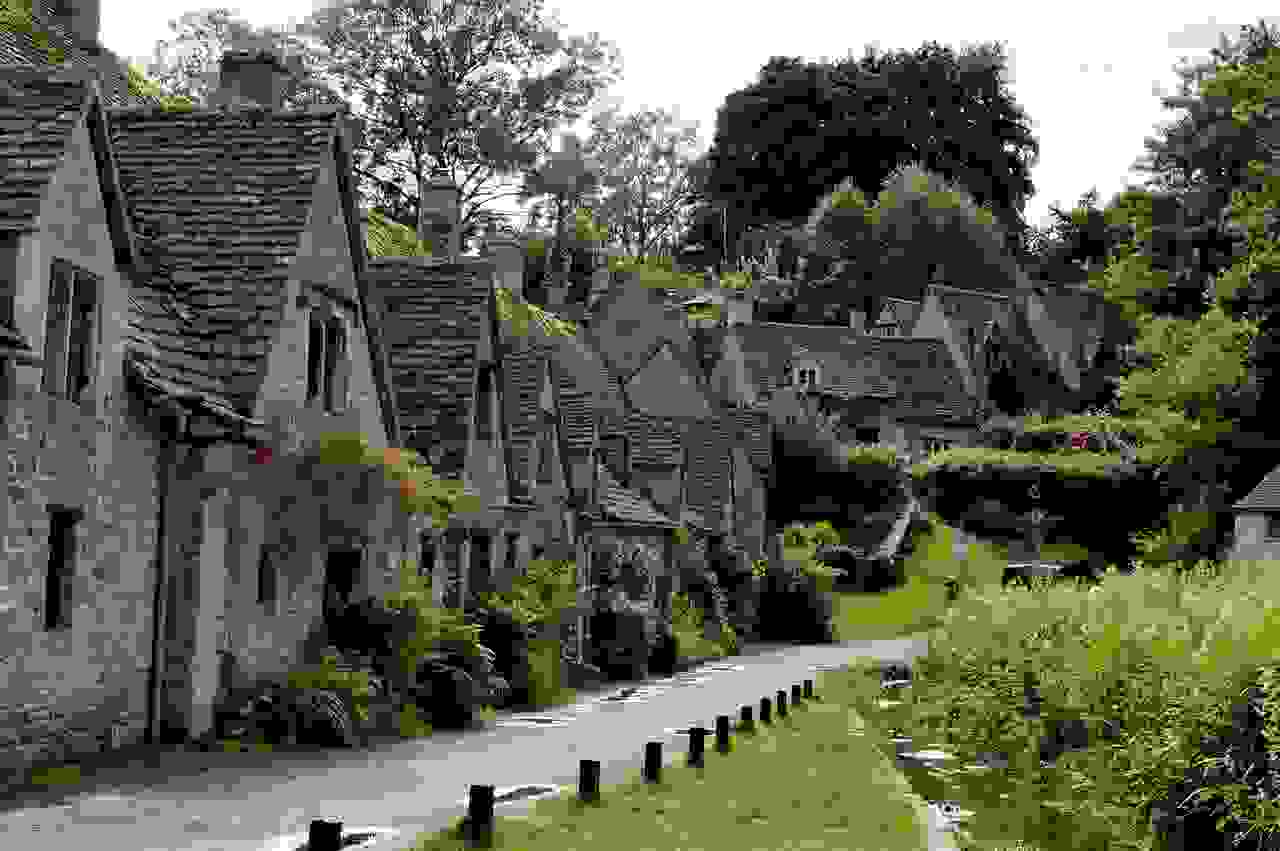 We can take you on a chauffeur driven journey through the picturesque villages and countryside of the Cotswolds. Visit the villages of Burford, where you can potter around some antique shops, have a pint at the Eight Bells Inn (Chipping Campden) and beautiful Bibury, with its lazy river and pretty weavers' cottages.  Or enjoy one of the country’s finest gardens at Hidcote Manor.

See the birth place of Sir Winston Churchill, Blenheim Palace, probably Britain’s largest aristocratic mansion, with a traditional maze, butterfly house and beautiful grounds, before we take you for a pub lunch at The Crown in historic Woodstock. Then on to Oxford – take in some of the best preserved groups of medieval architecture and the famous and ancient Christ Church College, with its cathedral and great Hall (used for the Harry Potter movies).

Have a drink in The Eagle and Child pub, where J R R Tolkien and C S Lewis discussed Hobbits, Lions, Witches and Wardrobes.

These landmarks can be mixed and matched and tailored for a unique experience. 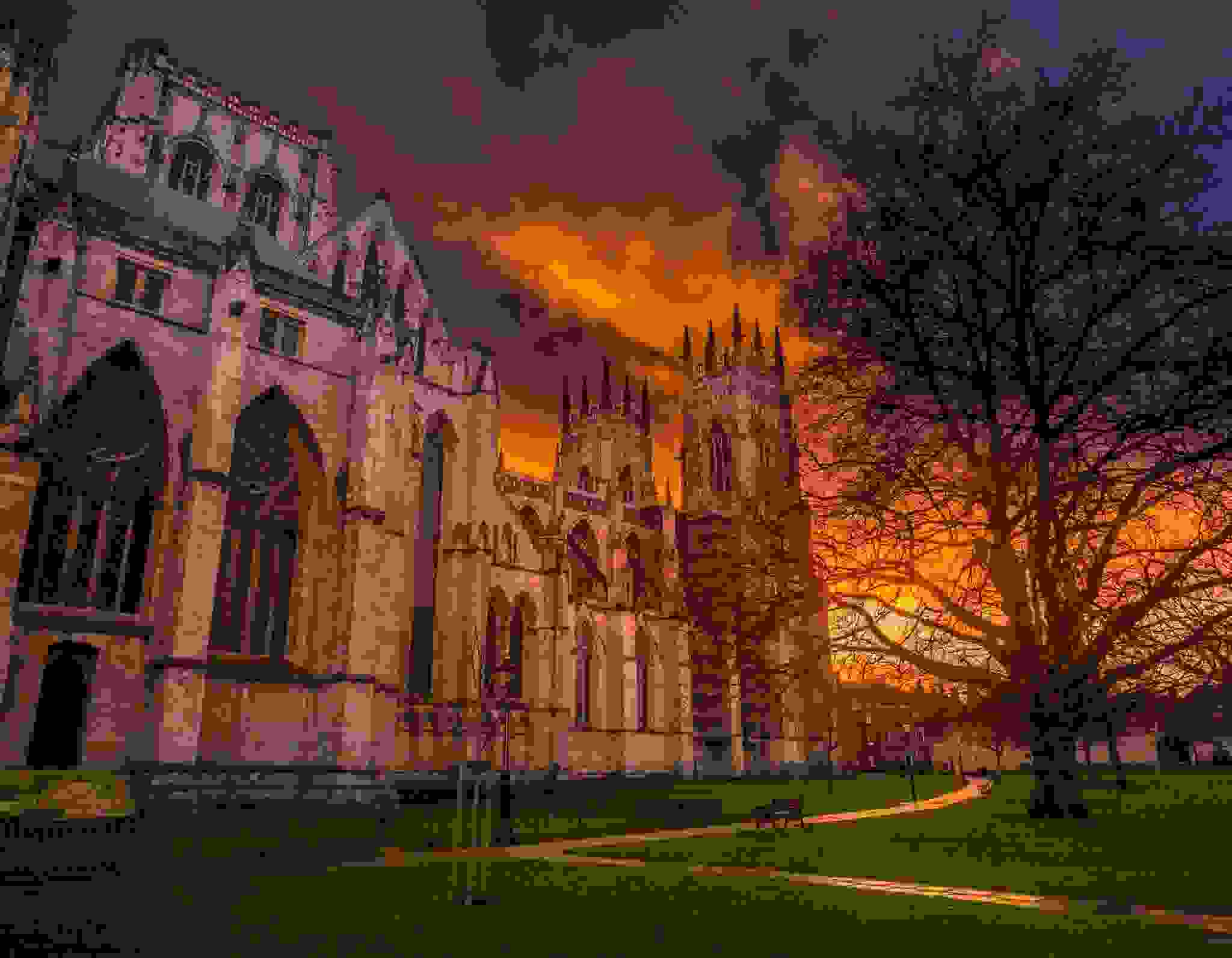 Head north to discover breathtakingly beautiful landscapes, quintessentially English villages and market towns set on the doorstep of the bustling cosmopolitan cities of York, Liverpool, Carlisle, Leeds and Sheffield. Areas of Outstanding Natural Beauty and four national parks, each with its own distinctive character, conceal a fascinating industrial past. Local foods, drinks and traditions complement a rich history, evidenced by stately homes and gardens, and monastic ruins, all with a story to tell. A truly beautiful place to enjoy heritage steam railways, leisurely rambles in the hills, around natural lakes or along coastal paths and a pint of locally brewed ale in a typical English pub at the end of a perfect day. 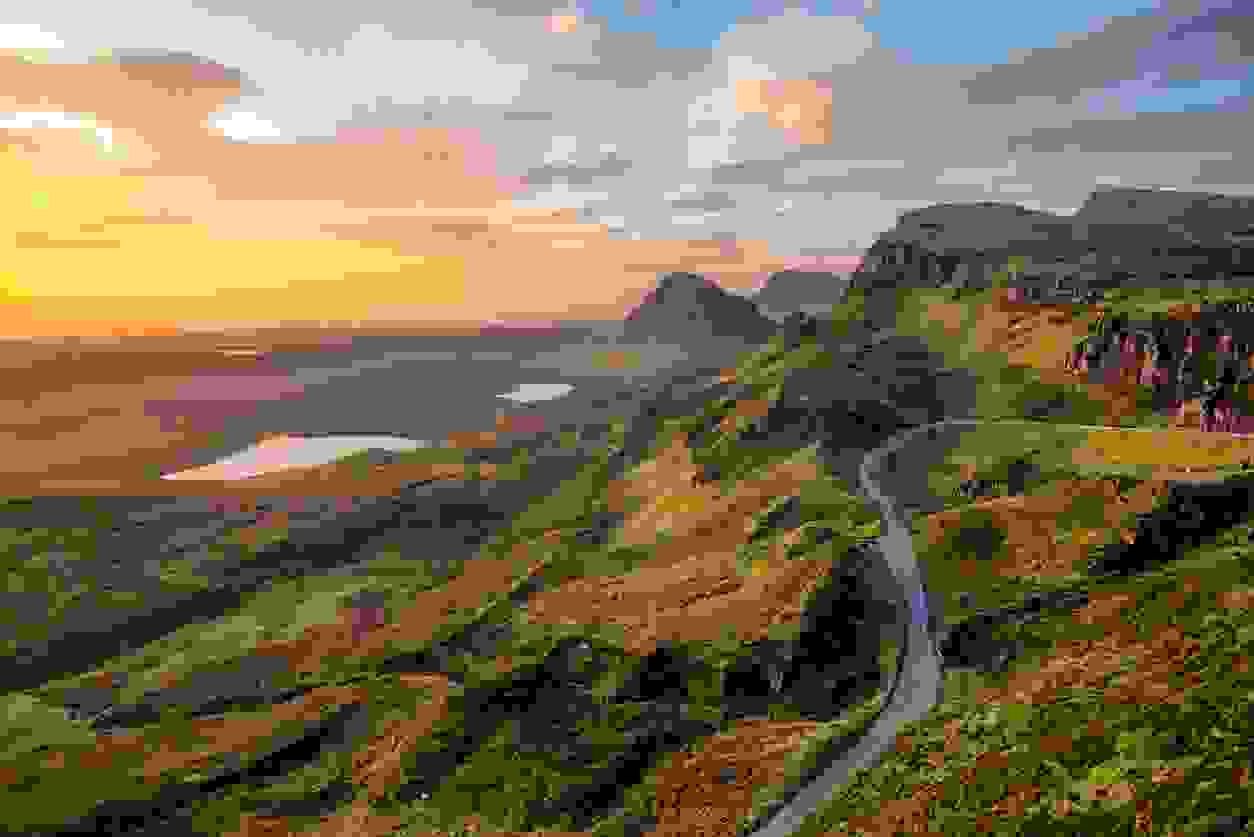 Edinburgh
Traverse the Royal Mile with its grand and imposing buildings, set foot inside St Giles Church and Parliament Hall. See inspirational religious leader John Knox’s house and visit the Royal Palace of Holyrood, where Mary, Queen of Scots was caught up in murder and scandal that forced her to leave Scotland for ever. Hear the gruesome stories of 18th century murderers Burke and Hare and the melancholy tale of the loyal little dog, Greyfriars Bobby. Then make your way up to the imposing fortress that is Edinburgh Castle, home to the Scottish crown jewels and centuries of history, as well as the pageantry and military precision of the annual Edinburgh Tattoo. A short journey from the centre, in Leith, where you can step on board Queen Elizabeth II’s decommissioned yacht Britannia, a glimpse into luxurious royal travels from an age gone by.

Highlands
The Trossachs are famed for their lovely lochs, sweeping valleys and majestic hillsides. Stop off at Stirling, with its imposing Castle, the National Wallace Monument and the Battle Bannockburn Visitor Centre which tell the stirring stories of 14th century patriots William ‘Braveheart’ Wallace and Robert The Bruce.
Driving northwards, you enter dramatic scenery and typical highland villages such as Callander, a great place to eat and offers some spectacular walks and cycle pathways along the river. Continuing on the Duke’s Pass the journey delights with highland cottages, lochs and fantastic scenery, before sweeping down into a town made famous by the writer Sir Walter Scott in ‘Lady of the Lake.’ Stop off and enjoy a detour to the stunning Loch Katrine, where you can enjoy a cruise on board the Sir Walter Scott.

Skye
The Island of Skye is 50 miles long and the largest of the Inner Hebrides. A truly magical place, it’s home to some of Scotland’s most iconic landscapes. Whether you are visiting for a few days whilst on a tour of Scotland or staying for a longer spell, the island has many ways to enchant you, with its mountain ranges, miles of dramatic coastline and captivating history.

Chauffeur Drive London, were able to support British industry and the CBI. We provided cars and chauffeurs for delegates from all over Europe who were attending a round table hosted by the Prime Minister at 10 Downing Street.

10 Downing Street in London is one of the most photographed front doors in the world . Since 1735, it has been the official residence of the Prime Minister. Prime Ministers and world leaders have been photographed outside this famous door and important announcements have been made to the nation from here.

Some of the most famous British political leaders have lived and worked in Number 10, including Robert Walpole, William Gladstone, Benjamin Disraeli, David Lloyd George, Winston Churchill and Margaret Thatcher.

So how did this rather modest looking building become home to the head of the British government? From the outside it appears quite unremarkable but a little like Dr Who’s TARDIS, it is actually much bigger than it appears.

A maze of corridors and passages join 10 Downing Street to a bigger and grander building just behind it. It also spreads out to the left of the front door, taking over much of 12 Downing Street which is itself connected by a corridor to 11 Downing Street, the official residence of the Chancellor of the Exchequer. The remaining buildings on Downing Street are government offices.

Westminster, where Downing Street is situated, has always been an important district in London. King Canute built a palace in the area and Edward the Confessor had a great abbeyconstructed nearby. It was however Henry VIII who created Whitehall Palace as a huge ‘entertainment complex’. It included real tennis courts, a tiltyard for jousting, a bowling green and a cockpit. Whitehall Palace was the official residence of Tudor and Stuart monarchs until it burned down in 1698. Today's Downing Street is situated on the edge of the Palace site, just a few minutes’ walk from the Houses of Parliament.

The first building on the site of Number 10 dates from the Middle Ages and was a brewery owned by the Abbey of Abingdon, which by the early 16th century had fallen into disuse.

The first house known to have been built on the site was leased to Sir Thomas Knyvet in 1581 by Queen Elizabeth I. One of the Queen's favourites, his main claim to fame was his role in the arrest of Guy Fawkes and the discovery of the Gunpowder plot in 1605.

After the death of Sir Knyvet and his wife, the building passed to their niece, Elizabeth Hampden and the house became known as Hampden House.

The building then came into the possession of George Downing. A rather unpleasant individual (Samuel Pepys described him as a “perfidious rogue”) he was nonetheless responsible for the street, its name and for the buildings we know today.

In 1682 Sir Christopher Wren was employed to redesign the houses. Between 1682 and 1684, a cul-de-sac of 15 to 20 terraced houses were built, now called Downing Street.

Number 10 Downing Street had several distinguished residents between 1688 and the early 1730s when King George II presented it to Sir Robert Walpole, then First Lord of the Treasury and effectively the first Prime Minister. Walpole refused to accept the property as a personal gift. Instead, he asked the king to make it available to him as an official residence, thus starting the tradition that continues today.

Walpole took up residence on 22nd September 1735. The Walpoles used their new residence as a place to entertain important guests, including royalty, politicians, writers and soldiers.

By the turn of the 19th century, although Number 10 continued to serve as the Prime Minister's office, it was no longer used as a home, as most prime ministers preferred to live in their own, more comfortable townhouses.

In 1868 whenBenjamin Disraeli became Prime Minister i, the house was in poor shape. No-one had lived there for 30 years.

In the late 19th and early 20th centuries 10 Downing Street was renovated and transformed into a grand residence with modern facilities. Disraeli had persuaded the state to pay for the redecoration of the public rooms, although he paid for the refurbishment of the private rooms himself. The first bath with hot and cold water in the house was installed.

In 1884 while 10 Downing Street was occupied by William Gladstone, electric lighting and the first telephones were installed. Central heating came to the house in 1937 and the attic rooms converted into a flat for the Prime Minister. 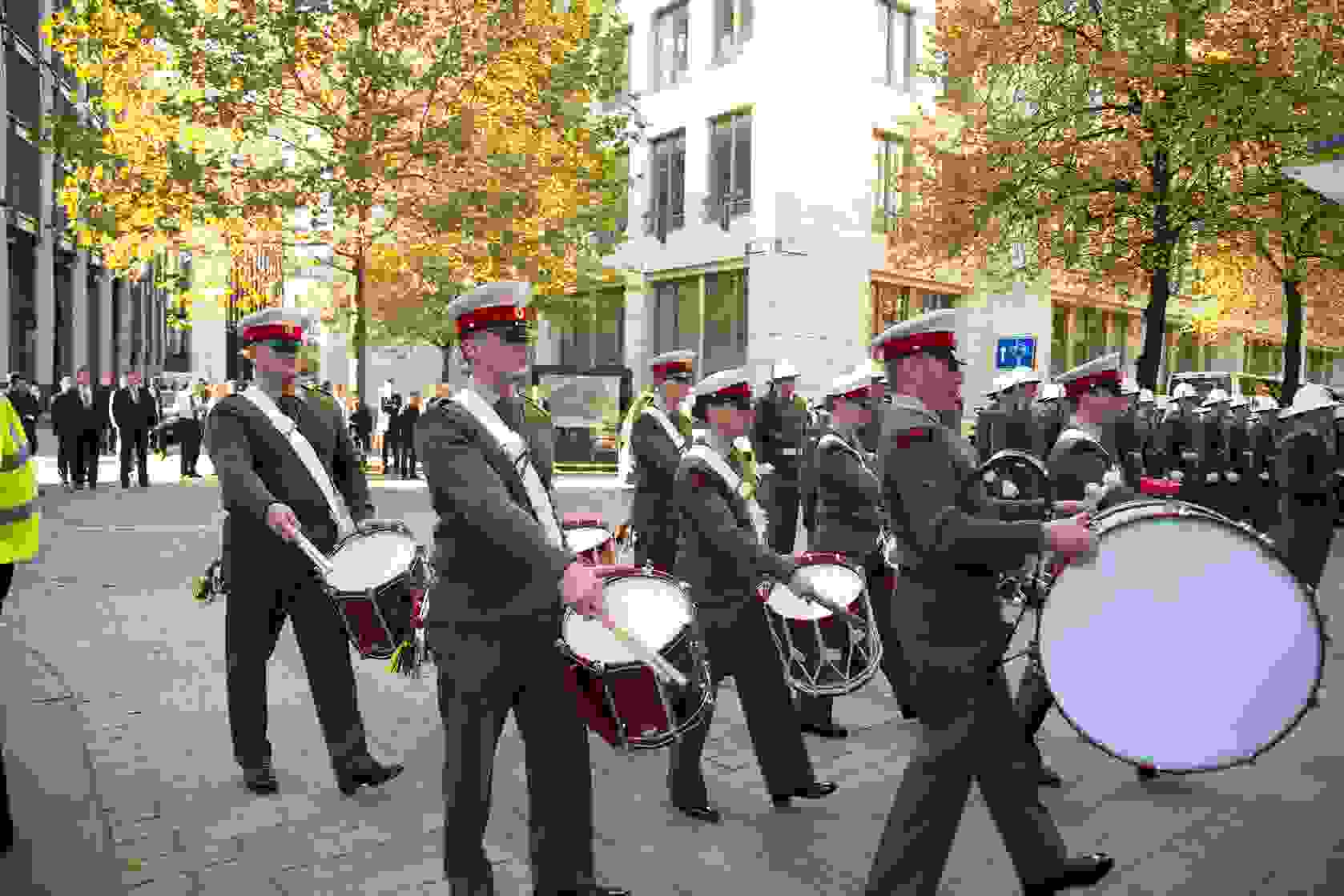 Stars turned out in force at The Sun Military Awards to honour the greatest armed forces in the world.

Chauffeur Drive London was proud to provide cars for guests at the awards ceremony in The Guildhall, City of London.

Around 100 nominees had earlier attended a reception at Downing Street hosted by Samantha Cameron.

With military precision Chauffeur Drive London made sure guests arrived on time in our luxury cars.

The guests left the ceremony to the sound of a Military band. A marvellous afternoon to honour some of our armed forces who continually step up across the world.